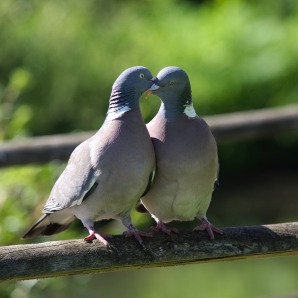 Boppa-oo-mao-mao. If you are familiar with 60s music, then you know that line from “Bird Dance Beat” released as a single in 1964 by The Trashmen. My aunts had the 45 record and I loved dancing to that iconic tune.

The song has filled my head as I watch the annual spring mating dance of birds. Sunday morning we ate breakfast at a retro diner downtown. We were seated in a booth next to large windows. There were juniper bushes next to the building, but trimmed back so they created somewhat of a shelter for some sparrows. I kept noticing a bird fly back and forth and another preening on a branch of the bush. The flying bird finally landed on the branch and then I realized that the mating dance was on. The little girl bird had her back turned, but coyly looking over her shoulder to see the display. The boy was turning on the charm, white chest puffed out, head bobbing and wings flipping up and down. [I think he could have been dancing to “Bird Dance Beat”.] Girl bird didn’t seem too impressed so he flew off. She turned back around and proceeded to clean her feathers.

Before long, the male returned with a twig in his beak as though to demonstrate “hey baby, I will build you a house”. That must have won the date, because they flew off together into bird love land. Or so I assume.

Spring is a glorious time to remind us of the continuation of all species. Birds dancing, cats meowing, squirrels winding themselves around tree trunks, and humans stripping down to summer clothes. Biology demands that all creatures seek out the prime specimens to perpetuate the herd. Creatures do what they do, but humans have a choice and so they should as we have a much greater life span than many creatures. Many of our non-human creatures won’t make it past the hour of their birth. That is a sad thought, but might be why they continually reproduce without thought.

Or maybe it is just because they want to “bop to the bird dance beat”. Boppa-oo-mao-mao.