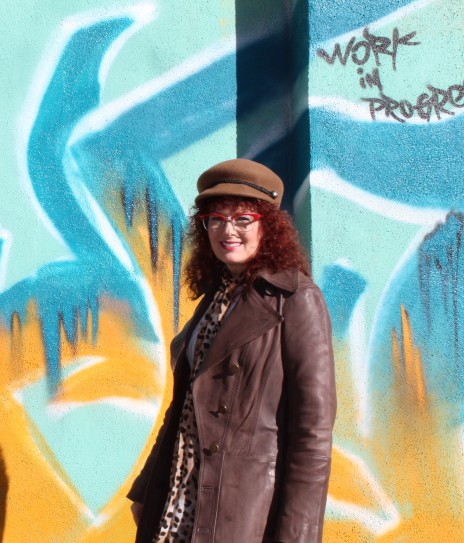 I’m not a big fan of leather coats. They tend to be too bulky and too stiff. Even my fave – the biker jacket. But when I saw this coat in the Sundance catalog (Robert Redford’s company), I decided that I seriously needed it. So I searched up a coupon and then pressed the Order button.

I’m glad I pressed Send. This coat is like butter and it has enormous style, almost military/calvary in its cut. The buttons come to a V at the waist and then the remainder are hidden. Those couple are a little hard to button from the inside, but oh-so-cool. It’s great for a slightly warmer winter day in Denver.

I know that from a social viewpoint, leather and its sister, fur, get a bad rap. Along with eating their contents. I have no “beef” [pun intended] with anyone’s choice; it is all in how you grew up. I grew up on a self-sustaining farm in Iowa. We raised milk cows (my favorite, as previously written), stock cows, pigs and chickens. We grew corn, soybeans, oats and alfalfa. We planted a huge amount of potatoes and an average-sized garden. We ate what we grew and sold some for profit. That is what farming is all about. In the middle of an Iowa winter, having a freezer full of meat is a necessity. We had canned vegetables and potatoes in cold storage, but it is not enough to feed a family through those long cold months.

Pigs and cows were sold at the stockyards, which gave us money to live on. They, of course, generated meat, but the hides had to go somewhere. So, they became coats, shoes, belts, handbags and so on. A very practical use of all the parts. I abhor cruelty in any form, but it normally doesn’t exist in a family farm situation. All our animals, right down to the adorable baby ducks were well cared for.

So if you see someone walking down the street wearing something you don’t agree with, allow them their choice. They might be farm-raised like me. I’m sure no one will berate you for wearing broccoli on your pants.

So let her wear it.

2 thoughts on “Leat-Her Wear it”